I sold this instrument in April 2017.   It’s unusual in having a history so I’m reproducing the details here for the longer term. 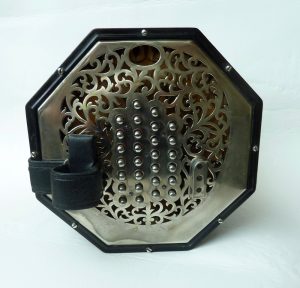 This is a 56 key Wheatstone tenor-treble Aeola.  Serial number 23657 is in the period 1891 to 1910 for which no records survive.  This one would have been made roughly half way through that period, around 1900. It is a top quality professional instrument with steel reeds in concert pitch, nickel ends and buttons, original six fold bellows and it’s original case.  It is superb player with a huge dynamic range and will play from a whisper to a remarkably loud full volume. 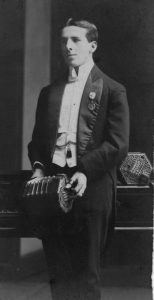 An all to unusual feature is that this instrument comes with a story.  I was asked to sell it for the great-nephew of the first owner who was Martin William Henderson from Cullercoats.  Henderson was born in 1880 and was blind almost from birth, he showed an early aptitude for music and was presented with this concertina by Sir James Knott.  He would have been about 20 when the concertina was made. With this instrument he played the music halls throughout Europe and as far afield as Australia.  He returned to Cullercoates in 1920 where he lived until his death in 1941.

The newspaper cutting from 1969 and a photo of Martin Henderson as a young man are included in the sale.

There is more information aboutMartin Henderson on Hungerford Freemasons and Mudcat Cafe and he is listed in the Radio Times in a broadcast at 11.30 on October 3rd 1925